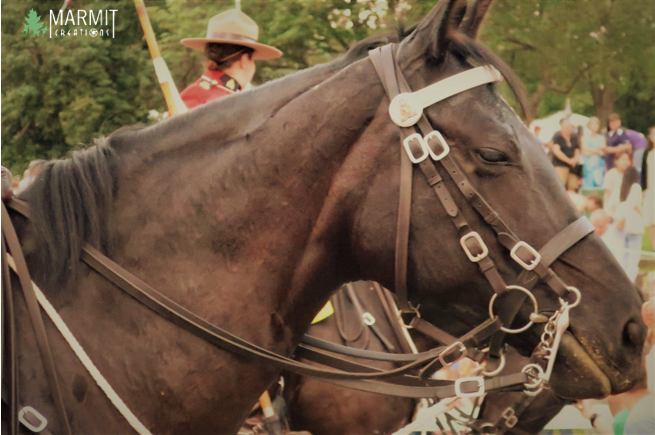 A long, long time ago (actually, it was only 2019, before we entered the world of Zoom and lock downs but it seems like ages ago now) on an early summer evening when the days were at their longest and the weather was at its finest, we attended a quintessentially Canadian event. We’re referring to the Royal Canadian Mounted Police Musical Ride.

This demonstration took place at the stables in Ottawa, where they have an outdoor practice facility.

This annual event always draws a large crowd, and for good reason. It is an excellent opportunity to see this spectacle up close and personal.

The Musical Ride is a Canadian icon recognized around the world.

According to their website, the Musical Ride “supports front-line police operations by building positive relationships, supporting recruiting efforts and promoting the RCMP’s image in communities in Canada and around the world.’

The troop consists of 32 police officers whose horses perform intricate formations and drills set to music. To say that the control, timing, coordination and precision of these riders and their mounts is absolutely impressive would be an understatement.

It is easy to see why the Musical Ride has garnered an international reputation and has made the Royal Canadian Mounted Police instantly recognizable around the world.

The Musical Ride performs in up to 50 communities across Canada each year between the months of May and October. It travels to each province once every 4 years to ensure as many Canadians as possible can experience this spectacle. The schedule for 2021 is still up in the air, but they are hoping to start performing again later in the summer, if conditions allow.

We’re hoping that conditions will allow us to return to the Ottawa stables in June 2022 for another performance.