A Whale of a Boat Ride! 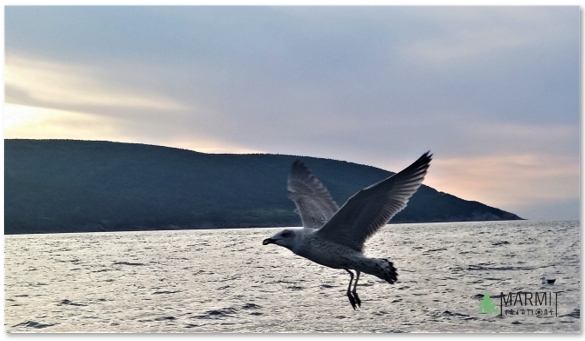 A Whale of a Boat Ride!

A highlight of our recent trip to the east coast was a whale watching excursion in Bay St. Lawrence off the northern tip of Cape Breton Island. With about 25 passengers on board on a bright sunny afternoon, our skipper Mel navigates the Oshan out of the harbour and into the large bay.  His daughter, who is his whale spotter, sits on the roof of the boat and scans the water for the tell-tale black fins.

He had earlier told us to watch her closely. When she spots something, she comes down casually and tells her father, never betraying her discovery. He then heads toward the pods that she has sighted. This is a routine they have performed countless times over the years.

The water is calm at first, but the further out we get into the bay, the windier it becomes, and of course the rougher the water gets.

The waves are tossing the boat around like a cork on the water. Mel doesn’t seem the least bit concerned, however, and somehow his daughter manages to stay seated and looking relaxed on the roof. I take that as a sign that I shouldn’t be too concerned—but I am, as I have never been in water this rough, with huge rolling swells 10-15 feet high. Or so it seems.

After about an hour and a half, Marian spots a black fin in the distance, among the huge waves and rough water. The skipper’s daughter had missed it. Marian yells, points to where she spotted the fin, and the boat changes course to catch up with the pod. We have found them!

For the next hour, the skipper maneuvers skillfully from one pod to another through the turbulent waters. My first sight of a whale occurs when one surfaces right next to the ship and clears its blowhole. It is so close we are sprayed by the mist and can hear the air being expelled.

I am in awe of how graceful and peaceful these creatures are, gliding effortlessly through roiling waters. I lose count of how many whales we see, but it is well over 30.

The scenery in Bay St. Lawrence is so spectacular that it would have been worth the price of the cruise even if we had not seen a whale. It turns out that this was one of the better whale watching days, according to Mel. This was the best $30 each that we have ever spent. It rivals the Moses Race on the coolness scale.

On the way back to shore, about a kilometre out, the skipper stops the ship to fish for mackerel. He does this on each cruise, and then offers the fish to anyone who wants to have a fresh mackerel dinner. Marian mentions to him that I never catch anything when I fish, so he invites me to throw in a line. No sooner do the hooks submerge than two mackerels hit and I pull them in. This doesn’t feel like fishing. It’s too easy. It’s like culling fish at a fish farm. But it’s also fun.

Unfortunately, we are not allowed to cook mackerel in our hotel room so we pass on the offer of free fish.

We return to the hotel, have dinner and spend a relaxing evening playing cards and drinking wine. We have fallen in love with this part of the Cape Breton and hate to leave, but the rest of the Cabot Trail beckons and the next day we continue our journey.