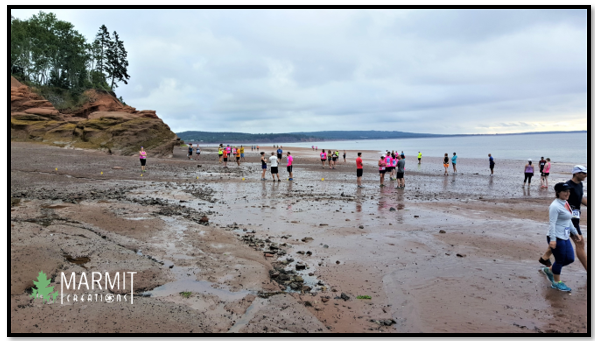 We have participated in a lot of different running, cycling, swimming, and skiing events, but none of them compare to our all-time favourite — The Not Since Moses race in Nova Scotia. This event features 5K and 10K races run on the tidal flats of the Bay of Fundy, at low tide (obviously).

Runners must complete the race before the tide comes in. How’s that for motivation to finish?

This is the most unique race that we had ever heard of, and it was at the top of our bucket list. We registered for the 10K distance and then planned our trip to Nova Scotia.

We stayed in a small (very small) cabin at a campground in the Five Islands area, almost directly across the Bay of Fundy from Marian’s hometown of Kentville. Race day dawned and the weather was picture-perfect.

When we arrived at the start line it felt like we were on the set of Jurassic Park. It would not have been the least bit surprising to see a dinosaur roaming around down there on the tidal flat.

Over countless millennia, the water had eroded the massive red sandstone cliffs into works of art. Prior to the start of the race a local geologist gave a mini lecture explaining the fascinating geological history of the area.

He told us that the formations that we would be running past during the race were over 200 million years old, formed when Pangea broke apart and lava erupted between the cracks in the tectonic plates.

This is a unique geological area which will eventually become a UNESCO world heritage site. And we were going to run a race here! We were about to experience something incredibly unique, which can only be seen by doing this race.

When the race started, we headed east for a kilometre before turning around and running westward for the remaining 9K.

The scenery was so overwhelming that we forgot that we were running through ankle-deep muck! Marian ran continuously while I stopped frequently to take photos and videos, and then catch up with her.

I ended up taking more than 200 photos and could have taken a lot more. This was a photographer’s paradise. It was also the coolest race we have ever run. Not even the Boston Marathon compares to this on the coolness scale. This will be hard to top.

As we entered the final few kilometres, I was euphoric and didn’t want the race to end. It’s not very often that you feel that way toward the end of a race. The weather was perfect, and we felt privileged to be participating in something this amazing.

All good things must come to an end, and this race was no exception. I ran ahead and crossed the finish line before Marian so I could take a video of her dancing her way to the finish line. Afterwards we got our pictures taken on the podium with Moses.

When we returned to our cabin, we jumped into the shower to wash away the orange muck, and then relaxed with a coffee and some delicious deep-fried scallops from a chip truck up the road. (The beer came a bit later.)

How’s that for a unique post-race recovery meal?