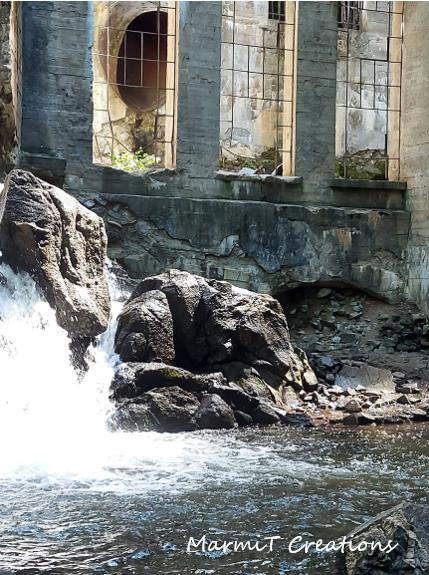 One of our favourite outings last summer, between lockdowns, was a hike to the Carbide Willson Ruins in Gatineau Park on the edge of Meech Lake. We knew about these ruins, but had never seen them. Given how much time we spend at Meech Lake in the summer and into the fall, we decided that it was time to make the trek and take some photos.

The hike in, from the O’Brien Beach parking lot at the south end of Meech Lake, takes about 20 minutes. When you arrive, you are taken back in time to the early 1900s, when Willson purchased 460 acres of land at Meech Lake for his summer home and his fertilizer plant complex.

The ruins are all that is left of a former mill, power station and an acid condensation tower that comprised a fertilizer plant constructed by Thomas Leopold Willson. Willson’s nickname was “Carbide” due his discovery of a calcium manufacturing process.

In 1915, while in New York City trying to scare up some venture capital, he died of a heart attack in the middle of the street. It was an inglorious end to the life of a pioneer of the North American electrochemical industry with over 70 patents in his name.

All that remains of the tower, which was destroyed by a fire, is its foundation. The dam is still there, and the remains of the plant still stand at the edge of the falls. His former summer home, now called Willson House, is used as a Government of Canada conference centre.

The Willson Carbide Ruins provide an interesting glimpse into our scientific history, nestled away in the heart of Gatineau Park.